A forum for UK yacht owners and sailors.

Living in the UK at anchor with a dog and a toddler - what can possibly go wrong?!
Post Reply
23 posts

We're now anchored back in Dartmouth, 7 weeks after we were last here, with a feeling of having had a very excellent adventure.

Shortly after we arrived we received emails confirming that we will be owning our very own land based home (a former station house) from some time during September. Here's the kitchen: 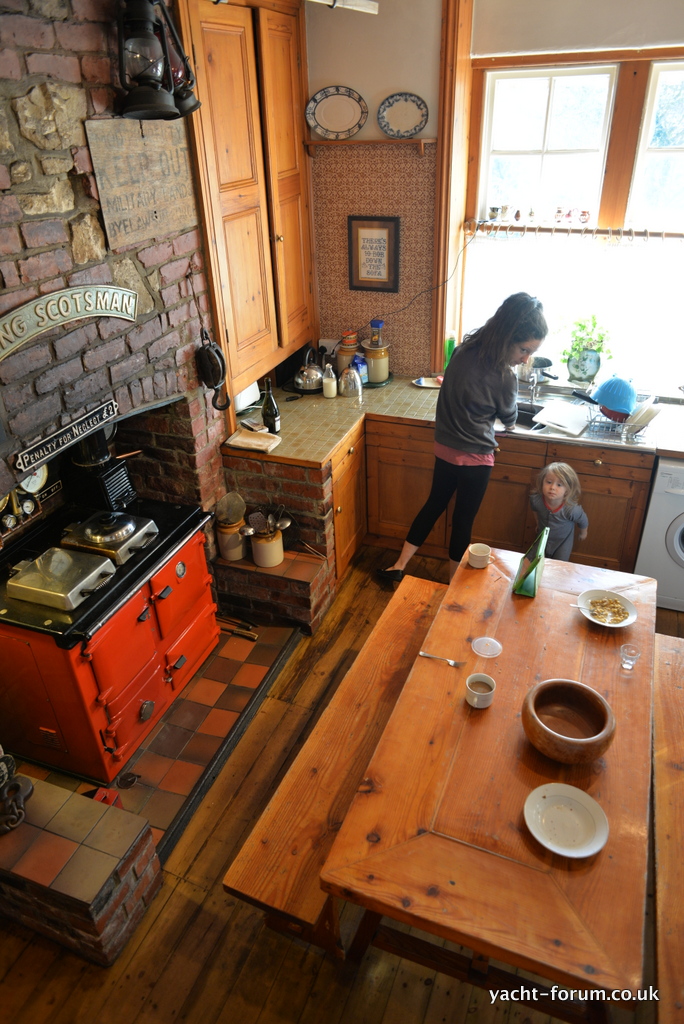 We'll continue to live on Towser for the rest of the planned time (until the end of October) but in the interest of mortgage minimisation, Towser is for sale. You can see our ad here:

And another one here:


Since I last posted we:

Watched the awesome Plymouth Fireworks Championships (they're the reason we were in Plymouth).

Sailed to the Yealm and anchored in Cellar Bay (free) for the night.

And then, careful not to repeat the last Eastward rounding of Start Point, sailed to Dartmouth. I was careful this time to ensure the wind was _with_ the tide. It was. But blimey! We made it from Salcombe Bar to 'The Homestone' off Dartmouth in 2 hours 5 minutes (a record for us I think) despite some of the largest seas we've ever seen. With Rose at the helm we saw 8.5 knots on the GPS on occasion, with an assisting current maximum (according to tidal stream charts) of just 0.65 knots. This was with a reefed mizzen and reefed jib and the engine just ticking over. We were surfing! Fantastic way to come 'home' to Dartmouth and round off our excellent trip.

I had hoped to get to the Scillies during our trip but the wind and our commitments never combined to make that possible, so the Scillies will just have to wait.

Here's a shot of the Plymouth Firework Championships (two nights, 6 companies trying to out-do each other for the coveted prize) which you _must_ go and watch if you ever have the chance. 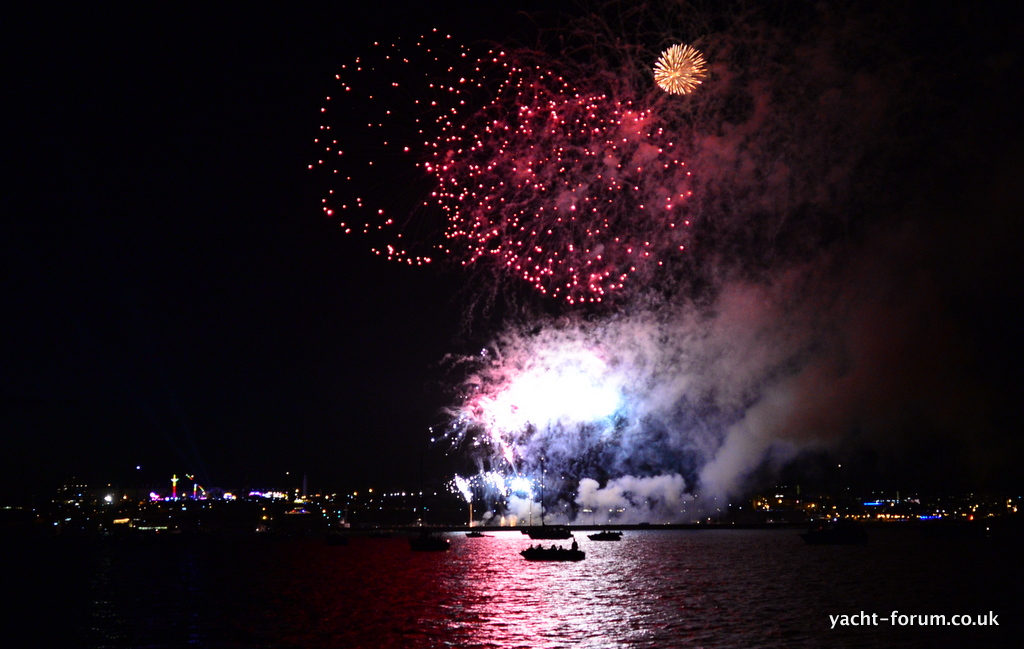 I guess I should comment on our (my) feelings about leaving life afloat... I think there's too much going on for me to be able to have any really. It's exciting to be moving to a new house, and to be having a new child, so perhaps that's keeping me occupied enough not to think about it. I did feel pretty down about the whole idea earlier in the year but I suppose I get used to this boat life after a bit and it just becomes 'normal' so the idea of a change is appealing after a while. But I know after every period of time off the boat I've been hankering after returning.

I suspect some form of water based accommodation will be part of our lives again in the not too distant future - at least just for the odd holiday.

Meanwhile there's the small matter of two and half more months afloat, Dartmouth Regatta next on a very busy agenda and no doubt more exciting sailing adventures too.

TTFN...
Last edited by Jeff on Tue Sep 23, 2014 5:09 pm, edited 4 times in total.
To join our mailing list and receive notification of blog updates, please send an email to watchblog@yacht-forum.co.uk and we'll keep you posted. You do not need to sign up to the forum to do this, and we absolutely WILL NOT share your contact details, or send you anything but notifications of new blog entries.
Top

Jeff, are you still with us? Is there a tumbleweed blowing through the forum? iS ANYONE ALIVE OUT THERE?
Top

We are not doing anything boat based as Towser is "sale agreed" and in fact the new owners take the helm on Tuesday next week. Which makes it about 4 weeks from first advert to completion, which is astounding!

I'm very pleased it's all gone so smoothly and quickly, and excited about new challenges ahead but realising more and more how much I love Towser now, and how much I'm going to miss him and life afloat in general. Dartmouth is such a wonderful place to be, and the local characters we've come to know more and more over the last three years will be sorely missed too.

It might well be a more tearful experience than the new owners expect, when we hand over the keys!

How about you guys? Been making use of this September warm weather, and steady easterlies?
To join our mailing list and receive notification of blog updates, please send an email to watchblog@yacht-forum.co.uk and we'll keep you posted. You do not need to sign up to the forum to do this, and we absolutely WILL NOT share your contact details, or send you anything but notifications of new blog entries.
Top

Wow, 4 weeks, that must be a record! I understand the mixed feelings - had the same when we moved boats last year but I suppose it's worse for you now you are moving ashore! Are you on board until next Tuesday or have you zipped back oop North already? Can't believe there will be no more tales from the engine room, no more dog v seagull stories, no more anchoring Masterclass. I think I am as sad as you are! Hope you will still stay in touch!

Not really made good use of the weather this year..........................at all. Came down to the boat last week and that was the first time since about the middle of July!!!!! Life is to blame, with other commitments seeming to take up all of our weekends and spare time. Am on board this weekend and loving being back. We will come out at the end of October so still a good few weeks left.

Have you got the keys to your new place yet? Houses are like boats - just spent a load of time doing maintenance on ours - bit like the boat, electrics, bit of plumbing, painting and clearing out. No escaping the jobs list!

Anyway, chin up! If you get withdrawal symptoms, just give us a shout!!!

We are still aboard, being very careful! Cleaning, polishing, checking and topping up. Towser will be ready to go to sea in style when the new captain takes the helm.

My parents have the keys to our new house and have sent photos of the insides with quilts my mum's made on some of the beds. It does look lovely.

Except it's starting to feel a bit like autumn is not too far away now down here. It'll probably feel arctic in North Yorkshire!

I've found myself browsing boats for sale on the web. Junk rigs are calling to me. Cheap, small ones with shoal draft and wind vane self steering... And perhaps the title of a new blog!
To join our mailing list and receive notification of blog updates, please send an email to watchblog@yacht-forum.co.uk and we'll keep you posted. You do not need to sign up to the forum to do this, and we absolutely WILL NOT share your contact details, or send you anything but notifications of new blog entries.
Top

Hmmm, will be weird. I suppose you will be sleeping on board on Monday night and then be in your new gaff on Tuesday night. I suspect it will be a few overcoats colder in North Yorkshire - it always is!!

Junk rig? jUNK RIG? The clue is in the name! Upwind they are truly shocking. Better options out there!

Exciting times ahead for you!

Hehe. Not keen on junk rigs then I take it.

Roger Taylor seems to do ok with his...

Sailing is not about speed anyway! It's about frugality

To join our mailing list and receive notification of blog updates, please send an email to watchblog@yacht-forum.co.uk and we'll keep you posted. You do not need to sign up to the forum to do this, and we absolutely WILL NOT share your contact details, or send you anything but notifications of new blog entries.
Top

Actually, junk rigs are great for sailing off the wind but if you are anything like us, the wind is more often forward of the beam so you are into the law of diminishing returns. Not totally convinced of an unstayed rig either. Infinite reefing is a good plus point though and downwind they are quick. Used to be a junk rigged Contessa 26 near us and downwind it would fly. Upwind, it went backwards!

I suppose you only have three nights left aboard Towser. Make sure you pack the handy andys for Tuesday and I am really expecting an EPIC final post from your liveaboard adventure.

I suppose even on a beam reach the vectors result in a wind forward of the beam so statistically you are bound to experience apparent upwind sailing more often than any other. I fell in love with the junk concept after reading "voyaging on a small income". You will not talk me out of it I think. I'm like a 2 year old. Have to find things out the hard way.

Epic final post after the next three nights (yes, 3 more sleeps)... Not sure I will be capable.

What on earth is a handy andy?!?
To join our mailing list and receive notification of blog updates, please send an email to watchblog@yacht-forum.co.uk and we'll keep you posted. You do not need to sign up to the forum to do this, and we absolutely WILL NOT share your contact details, or send you anything but notifications of new blog entries.
Top

Handy Andy's = disposable hankies/ tissues. I suggest you buy a pack - quick! I wish sailing was really encompassing frugality but you are always cooperd at the first hurdle by everything being so damn expensive!

As a thought, perhaps you should just invest in a water bed for your new house and you could be gently rocked to sleep like you were still on Towser.

A waterbed, with a wave generator, a creak generator, a squeak generator and a frap generator, a seagull screech generator and a large weight suspended above it by a horses hair (Damocles style), that needs to be constantly washed, serviced, varnished and generally looked after, and which is impossible to leave without climbing down a ladder into a soggy vehicle which requires massive effort to move... Oh and a dampness generator.

Only then would I truly feel at home.


But that would be boring!
To join our mailing list and receive notification of blog updates, please send an email to watchblog@yacht-forum.co.uk and we'll keep you posted. You do not need to sign up to the forum to do this, and we absolutely WILL NOT share your contact details, or send you anything but notifications of new blog entries.
Top

Yeah! Not your style at all!
Top

Safe to ask yet if it all went OK? or is it still a bit raw?


Hope you are enjoying the house!

Hi Rob. Thanks for thinking of us

How about you? Been doing much afloat?
To join our mailing list and receive notification of blog updates, please send an email to watchblog@yacht-forum.co.uk and we'll keep you posted. You do not need to sign up to the forum to do this, and we absolutely WILL NOT share your contact details, or send you anything but notifications of new blog entries.
Top
Post Reply
23 posts

Return to “Jeff's Blog - living on a yacht, at anchor, with a toddler.”