A forum for UK yacht owners and sailors.

Yacht Isabella, Our Home and Transport

Information common to both of our blogs.

Yacht Isabella, Our Home and Transport

Here's the specification of Isabella for those who are interested:

Isabella was originally named Westerly Concerto and owned by a sailing school in Southampton. Later on after resale she was renamed to 'Langlands of Whitby' which is highly coincidental (see my first post for the connection, will try not to repeat myself too much) - would be interested to hear if anyone knows the reason why she had that name. The owner prior to us changed the name to Isabella - we like it a great deal so will keep it. While called Langlands of Whitby, Isabella undertook a multi-day voyage, an account of which was documented and posted online (to my surprise when I found it). That can be seen here:

Other titbits about Isabella:

Safety & Nav Equipment (so far):
4 man seago canister liferaft (in service)
Dan Buoy
Garmin Handheld GPS with charts.
Broken Lowrance Fixed Chartplotter (will get a garmin to replace, one with AIS compatibility, and an AIS engine)
Jackstays down both sides of the boat (plus guardrails all round)
NO radar
NO radar reflector (on must get list)
Avon Redstart OLD leaky dinghy (called Phil)
Horrible Outboard (I hate outboards!)
New standing rigging (just)
New running rigging (feb 09)
Harken Cruising Furler #1 (new)
Rocna 15kg Bower Anchor (custom installation as wouldn't fit the usual way, see more here...)
NO windlass, manual or electric - windlasses are for wimps... and people with bad backs, like me, but I seem to manage

15m 8mm galvanised chain spliced onto 50m 14mm nylon 3 strand (intend to upgrade to all chain and use this lot on...
15lb geniune CQR in the forward anchor locker.
Two decent manual lifejackets
Four bulky horrible but newish lifejackets
Raymarine Tiller Pilot
Genoa, Main and Lazyjacks new in ~2006 by Kemp Sails
Boom tent custom made for us by Hotwells Canvas, sits over our whisker pole, slung under the boom.
Whisker Pole (which is occasionally used for poling out the Genoa, and only for the cruising chute when Woody is aboard)
Cruising Chute (which never works unless our friend Woody is aboard)
Inshore Flare set + 2 x White Handhelds
NO gardening gloves (on list of must gets, for this and for hoisting the Rocna)
Rutland 913 Wind Generator + Marlec HRDX charge controller with wind/solar dual capability
NO solar panels (which I may get as they will enable me to work more at anchor on laptops)
2 x 110Ah Leisure Batteries and a space for another larger battery which is on the todo list.
Homemade Hanging Anode (which has been a wee gem as my hull one I think is not electrically connected to anything, and despite the GI we're losing zinc)
Navico Depth
Navico Log
Raymarine Auto Pilot console (not networked to anything)
P/A fog horn speaker connected to DSC radio in cabin
Manual bilge pump
Lobster pot
Safety knife

Also:
Magma gas/charcoal boat barbeque (which I love almost as much as my M320 lamp!)

A picture tells a thousand words. Here's 2000 then. These are from our first night aboard. The same day we'd paid and signed on the dotted line to buy Isabella: 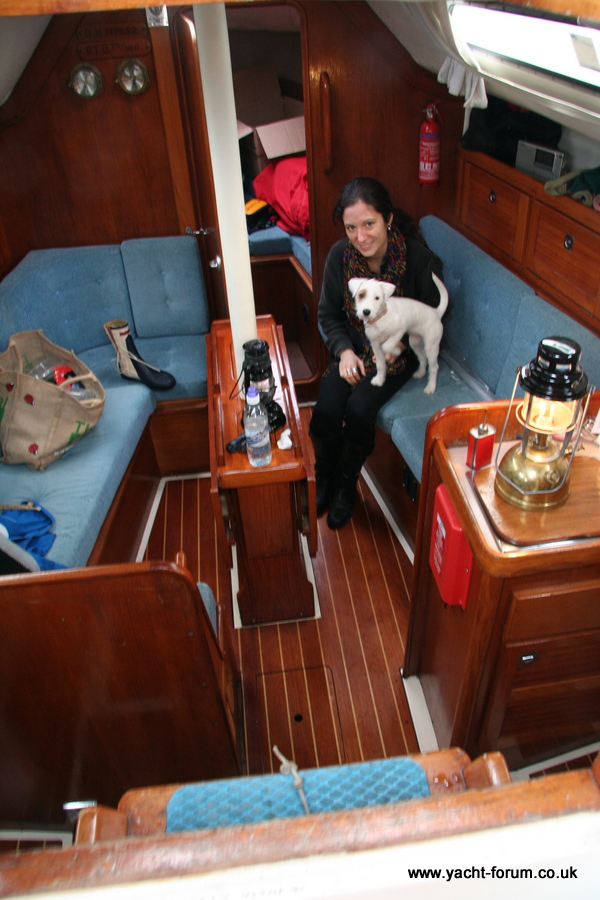 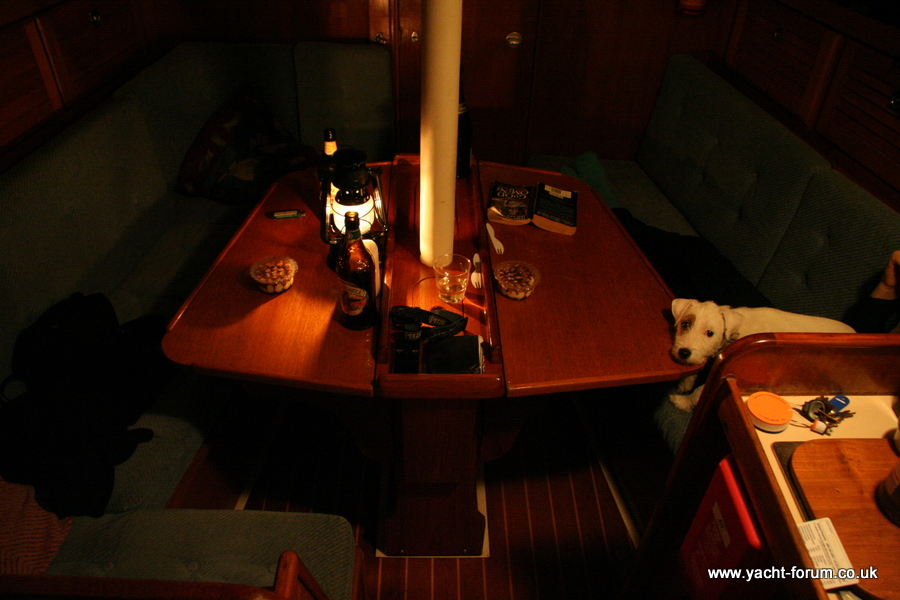 * The "classic" layout has a double cabin starboard aft, heads port aft, and a very large port cockpit locker, with a standard V berth forward. This is unlike most Tempests which more commonly had twin aft double cabins - very little cockpit locker space, heads forward (and full width) with a door from the heads into a forward stowage cupboard. I find the cockpit locker extremely useful, and Rose and I actually prefer the V berth to sleep in than the aft cabin as it feels less claustrophobic, so glad ours is this way around.
To join our mailing list and receive notification of blog updates, please send an email to watchblog@yacht-forum.co.uk and we'll keep you posted. You do not need to sign up to the forum to do this, and we absolutely WILL NOT share your contact details, or send you anything but notifications of new blog entries.
Top
Post Reply
1 post • Page 1 of 1